Understanding the Transgender community in Indonesia

Transgender people and non-binary folk have always been a part of Indonesian history, culture, and people. From the Hindu-Buddhist period of the past to the Islamist era of today, transgender people have permeated the Indonesian society and have faced varying levels of tolerance and acceptance. A significant proportion of the transgender community comes under the umbrella term of waria.

The Meaning of the Term Waria
The concept of waria is unique to Indonesia and refers to the co-existence of both genders in one person. The word waria stems from two words: wanita (woman) and pria (man). Warias are biological men who have what is described as ‘the soul of a woman.’ They may be transgender women, effeminate gay men, or transsexual persons. A sense of femininity unites the wide community that comes under warias. While some of them undergo sex reassignment surgeries, others don’t do so for religious or personal reasons and choose to identify as women while living in male bodies.

Major Issues Faced by the Transgender People
Warias and transgender people are faced with economic and social discrimination and lack legal protection and safeguard. Issues of gender can come in conflict with religion, with religious clerics openly exhibiting hostility to the LGBTI community. The most frightening thing is that the overwhelming social intolerance for sexual minorities is likely to influence legislation in the world’s most populous Muslim-majority country. In the last 20 years, politicians have used discrimination against the LGBTI community to win the votes of religious groups.

Social Landscape in the 70s and 80s
Things were different just a few decades back, with transgender activists battling and winning against social discrimination with the help of the government. One leader of transgender rights in the 1970s and 1980s was Nancy Iskandar. Herself a transwoman, Nancy and other transwomen like her were able to consult with the local government in Jakarta to make some breakthroughs for transwomen in Indonesia. Consulting with the government, they coined the term waria for transgender people to replace a slur that was commonly used then.

In 1979, they brought recognition to trans people with a night of performances by transwomen in the best concert hall in Jakarta. The audience had over 3000 people that included government officials. The event was a success and was covered by print and electronic media. The government also funded skills-training for hundreds of transwomen to reduce the number of sex workers on the street. The government and the activists’ combined efforts resulted in increased acceptance of trans people and helped improve their lives.

A Recent Breakthrough
However, the success of the 70s and 80s proved to be transient, and today, trans activists face as big challenges as ever. Still, this year, there has been a small breakthrough with the appointment of a transwoman to public office. Breaking stereotypes and norms, Hendrika Kelan is the first Indonesian transwoman to be selected as a leader by her community in Habi village in the Sikka district. 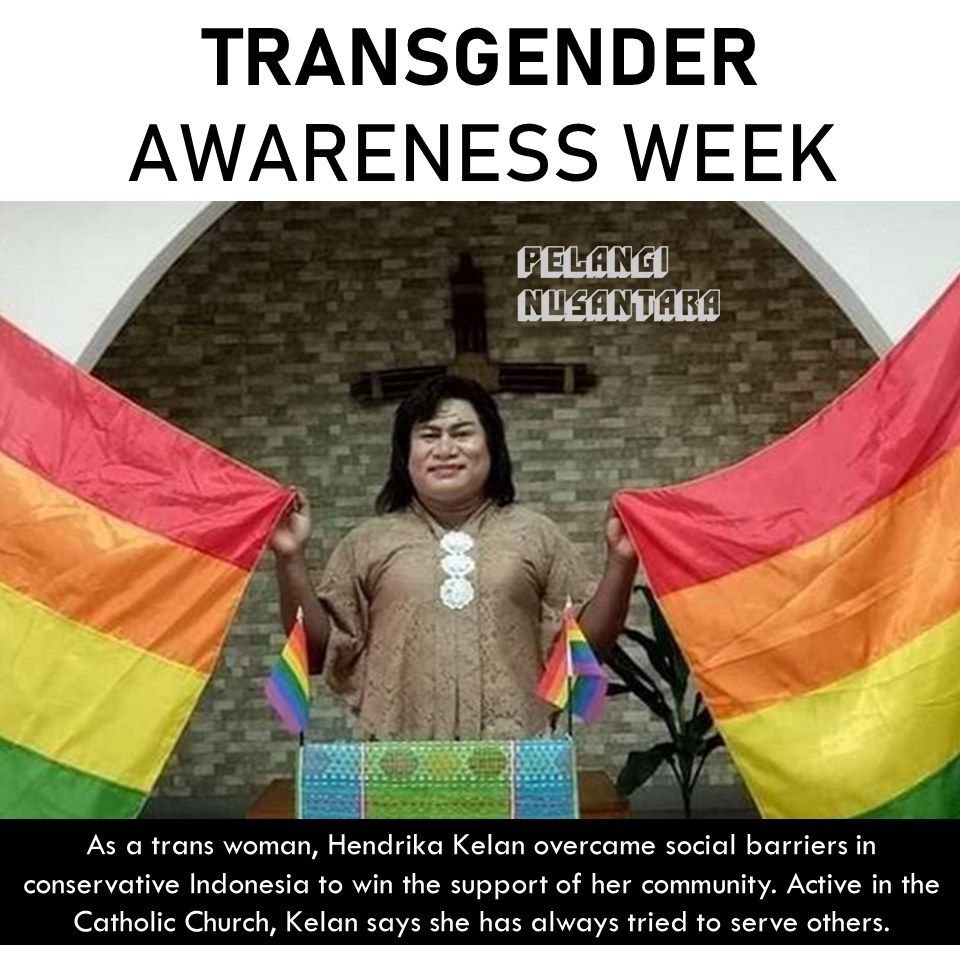 Kelan lived a hard life and had to battle her family, the church, and society to claim her identity. Denied job opportunities in Yogyakarta, she had to take to sex work and street performances to make a living. LGBTI activists helped her pull herself off the streets, but it was in her village Habi where she found a true home and acceptance.

Kelan’s neighbors and community members, impressed by her dedication and sincere efforts for the community’s welfare, preferred to elect her to the village consultative body instead of seasoned candidates. This was back in March; since then, Kelan has been occupied with providing relief to people affected by the pandemic through food security programs. She is fully contributing to the community that has accepted her as one of their own.

What Can We Do?
The appointment of Hendrika Kelan to a public post is a testament to the strength of community and the power of activism. If Kelan had not been assisted by activists, she might have never gotten off the streets. And if the people in her village had not been willing to give her a chance and listen to her, she would have never reached her true potential. Imagine how many Kelans are leading a life of misery only because of people’s unwillingness to listen.

The most significant and helpful thing any of us can do is to treat trans people with respect. The discrimination, marginalization, and ostracizing of trans people stem from the disrespect of their persons, feelings, and intellect. Respecting trans people also requires that we respect their voices and opinions. Only when we are willing to listen to their side of the story can we hope to understand their struggles and pain and perhaps do something to help them. If you want to become an ally for transgender people, be sure to read this.

Pelangi Nusantara is an international advocate rallying for love, equality and dignified living for Indonesia’s LGBTQ+ community. We stand to bring the injustice, prejudice and unfair treatment of the much-oppressed Indonesian LGBTQ+ community to light. Stand up for what is right — stand with us today!

What is Gender Dysphoria?

When the gender assigned at birth does not match the self-image and experiences psychological distress, this is known as gender dysphoria. It’s easy to confuse

The Cold Case of an LGBTQ Pioneer Marsha P. Johnson

The Always Smiling Johnson Marsha P. Johnson was one of the most prominent figures in the gay rights movement in New York City in the

This month, our Gaydar feature highlights the talented, bright, creative and gorgeous mind of Jesse Tyler Ferguson! He plays the main character of the Tucker-Pritchett